Basar International Group is constantly in search of finding value solutions for the global citizen looking to find value in multifamily residences and migration trends along the northeast corridor. Our Tri- City marketing platform servicing and interconnecting New York, Philadelphia and Washington DC inter-migration patterns to best of class apartment and living spaces. Basar Global’s urban and suburban marketing  platform is in response to growing demand trends and demographic data around migration patterns of foreign and domestic clientele.These global citizens are in search of  great residences and cost value solutions in 24/7 cities.  Our regional platform services  a growing number of millennials seeking suburban residences with cheaper rents and a inexpensive schools. We feel that apartment rents has peaked along the northeast corridor and there is a over supply of class A apartment residences based on income. This factor has led to a major migration by young people to the suburbs that will continue as the global economy continues to slow and asset managers begin to deleverage. 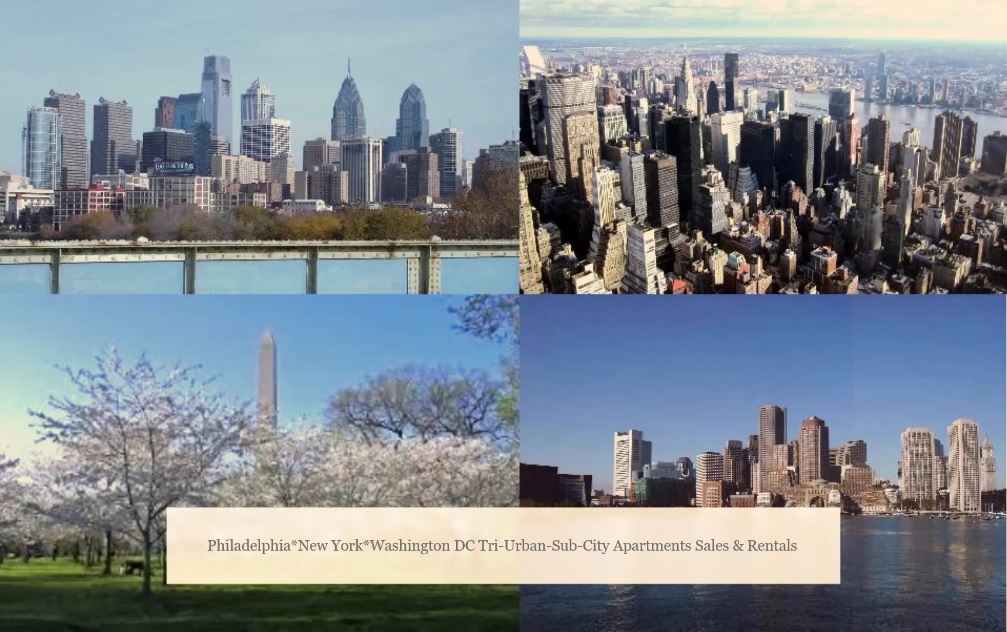 Philadelphia in the last few years, around 50,000-60,000 people have been annually moving into Philadelphia County from other domestic locations (and about 10,000-15,000 from abroad). Most of the domestic clientele are coming from the tri-city northeast corridor with a decent amount from western US markets. Philadelphia’s population has been increasing but it still has a major net loss to the suburbs and a net loss to New York cities boroughs and Washington DC.  In each of the northeast cities immigrants and newborns are driving some of the growth  The number of out-of-staters living in Philadelphia is still almost 20,000 greater than it was in year 2000. Center city average rents are  $2,500 near Rittenhouse and in Old City area average rents are $2200 which is close to the main drag of Center City and the Reading Terminal Market, it’s no surprise that the rents  continue to rise. While trending areas outside of the center city such as Fishtown and Northern Liberties average rents are about $2000 per month.

Most of the migration is to the suburbs of Philadelphia. The value solution  is around cheaper rents and the ability to work in Washington DC or New York and live in Philadelphia while saving several thousand dollars yearly. The most recent rent data from Apartment List show that the median apartment rent in DC is 38 percent higher for a 1-bedroom apartment and 32 percent higher for a 2-bedroom unit than in Philadelphia. What’s more, rents are rising faster there: 2.3 percent over the previous year vs. a mere one percent in Philly.

Basar Global’s tri-city platform targets the international migration moving into NYC servicing the financial service and rapidly expanding technology sectors. Our primary targets are emerging market migration from global capital flow and new wealth creation in Southeast Asia, India, Africa, Eastern Europe. Our clientele is migrating from Singapore, Mumbai, Hong Kong, Berlin,London,  Dubai, Jeddah, and Cairo.There is only one New York, especially when it comes to globalization, employment, culture and income. New York City is America’s classic immigrant city; it was the major historic gateway for the country’s eastern and southern European arrivals a century ago and is a major receiving center today.
There are more people moving from Manhattan to surrounding five  boroughs of New York city than those migrating to Washington DC and Philadelphia combined. More affordable areas of Brooklyn, with rentals priced closer to $2,000, could be found in Greenwood Heights and Crown Heights. The estimated population for New York City in 2018 is 8,550,405. This reflects a growth of 375,300 people, a 4.6% increase since the 2010 census recorded 8.175 million residents.

There is only one New York, especially when it comes to globalization, employment, culture, entertainment and income. New York City is America’s classic immigrant city; it was the major historic gateway for the country’s eastern and southern European arrivals a century ago and is a major receiving center today. Philadelphia offer a lower cost of living then New York , while Manhattan is the global financial and technological center which provides higher incomes, stronger networks and an international composition of extraordinary diversity. All of New York city’s institutions have combined to make it a globalized city like no other in the United States. New York city offers one of the worlds greatest skyline and most effective transportation system.New York city’s 20 billion dollar Hudson Yards is the largest infrastructure development project in the United States. Both Philadelphia and Washington DC does not compare to New York city on adding value  to the GDP of the United States and the world. The most significant increase in New York City’s population occurred in the borough of Brooklyn, which showed a 5.3% population increase between the 2010 census and 2017 estimates. The second most substantial change is in the Bronx, which reflected a 5.1% increase, followed by Queens (4.9%), Manhattan (3.7%) and Staten Island (1.2%). Basar International Group offers global citizens and millenials various apartment living solutions by creating  value through results. Every month we feature 3 tiers categories of apartments selling 15 to 20% percent below the average  rents in the cities and suburban areas of New York, Philadelphia and Washington DC.